Massive dignity even in illustration

“If you are going to think Black, think positive about it. Don’t think down on it, or think it is something in your way. And this way, when you really do want to stretch out, and express how beautiful Black is, everybody will hear you.”

Today we have to many African Americans*, especially in the public eye and especially in academia , pretending being black is some albatross on their necks white folks need to ignore or reward in order for them to succeed. Most will try to cover up those feelings of inadequacies up with false proclamations of pride. Mainly concerning some “radical” Negro telling white people off, “speaking truth to power” or some such, like a rebellious teen does to his momma. But they give away their feelings of inadequacy by showing how worried they are about the Caucasian race’s opinions . Sadly, they don’t know prospering and ascending; taking black culture to new, yet tradition rooted, heights is far more impressive than petty rebellion.  The accomplished Leontyne Price basically understood this and that’s why I decided to highlight her words at the beginning of this post.

* I use African American instead of Negro or Black on purpose.

The Presentation of Jesus in the Temple

Rembrandt was born 407 years ago today. This is my favorite piece of his.

Fruit of our rights at the ballot box?

Personally, I’d substitute the pine box for the ballot box. You are equally effective in both, atleast with the pine box there is a good reason

Lead Belly the Blues man and his beautiful wife in Wilton,CT

Booker T. and Them a Blues.

Yesterday on Twitter some young “radical” fellow named The Angry Indian, attempted to malign me by calling me Booker T. Washington, I almost idolize Mr. Washington, so to that apt comparison I paraphrase gangsta rapper extraordinaire Ice Cube and say “Do Booker T. have a brother? I’m it, yeah!”
In Cube’s song he actually referenced the deceased Khalid Muhammad,  former Nation of Islam member and founder of the New Black Panthers. Not my sort really, but I always, and maybe alone, preferred him to the new leftist like original Black Panthers. 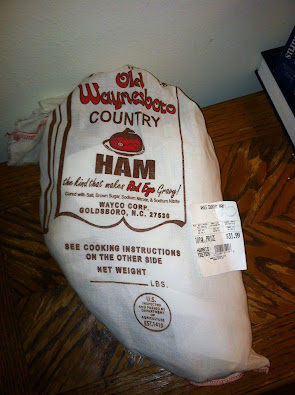 I suppose one good thing about having a largely ignored blog is no one notices when I’m not on schedule. I am a week late with this post, my apologies.
The picture above is that of a country ham I recently received. It tastes great, I actually ate breakfast for dinner last night so I’d have a reason to have some more.

This morning, I started editing an old post on the failures of America’s black middle class. I am not much of a writer so it isn’t coming along all that well, but I’ll share the opening paragraphs:

The Boston Brahmins revered history and worshiped their forbearers, shunned materialism and promoted art, culture and spirituality. These Bostonians stood atop America’s caste system, and were called Brahmins-after the Hindus who owned a similar position in their culture’s class structure. A lesser known social phenomenon were a strata of Negros whom lived adjacent to these elite Bostonians, who emulated these values. They were highly literate, loved knowledge, lived to glorify their ancestors and their sense of noblise oblige led them to be at the for front of the abolition movement. Unfortunately they were quite insular, practiced an odd form colorism and engaged in middle class snobbery. They of course weren’t Brahmins, but middle class – Negros hadn’t the freedom to gain such a status. Still they sat astride Northeastern Black America’s class structure and maybe even Black America’s. They also exhibited the failure of our nations Black upper and middle classes to lead, inability to create an model 0f aristocracy based upon values owned by them. Never created a philosophy of thought particular to African Americans, matter of fact they embraced White American values wholeheartedly, though fortunately they emulated the most noble of whites.

Paul Devlin is an expert on Albert Murray and Ralph Ellison, as far as I am concerned. He is also amazingly literate and well read and seems to always know how to highlight the most interesting parts of whatever he is reading. I follow him on Twitter and he is maybe the only person on their who can critique T.S Eliot and has also read Ice Burg Slim.  Not to mention he can easily float between discussions on Louis Armstrong and Krs One (tho somehow he doesn’t understand that Big Daddy Kane is the superior artist.) Anyway, I think its clear I am an admirer him. Here is an article on Ralph Ellsion he wrote for Slate, called Why Did Ralph Ellison Never Publish his Second Novel?,  its a great read so check it out. The references he makes will give atleast a month worth of literature to read.  Here is a little taste:

What if Ellison’s novel didn’t end in fire, but in ice? In 1967, the crime novelist Iceberg Slim, a reformed pimp, published Trick Baby: The Story of a White Negro, which features an African-American con man, Blue Leon Howard and his protégé, Johnny O’Brien, better known on the south side of Chicago as “White Folks,” an African-American but “a dead ringer for Errol Flynn.”

Slim, like Ellison, was clearly intrigued by the possibilities that a “white Negro” suggested for fiction, and the two stories have several notable parallels. Slim situates the smooth operator O’Brien, much like Ellison’s cunning Bliss, as the adopted son of a tough, wise, soulful African-American man. The age difference between Slim’s Howard-and-O’Brien team is approximately the same as that between Ellison’s Hickman-and-Bliss team, about 25 years. And just like Bliss, O’Brien eventually leaves the African-American community that raised him behind and blends in with white circles in America.

In contrast to Mailer’s white hipster, who seeks a sort of anesthetic sexual liberation through what Mailer sees as the wild, psycho-sexual world of blackness, Ellison and Slim’s characters appear unambiguously white yet are raised within highly-structured institutions of the African-American community: the church and the con game. Christianity, and even the big con, reflect a formality that Mailer failed to see in African-American culture. To Mailer, African-Americans are “cultureless” and “illiterate,” comprising a community that “relinquished the pleasures of the mind for the more obligatory pleasures of the body.” A far cry from Mailer’s white Negro, Ellison and Slim’s white Negroes, though raised on opposite sides of the black community, both learn rhetorical techniques from their adoptive black fathers that they then  employ  for personal gain on the other side of the color line. These “white Negroes” are wily operators, shrewd manipulators of psyches and institutions, and ice-cold customers on a relentless quest for money and power—hardly primitives chasing orgasms.

Sunday would not be Sunday with out a bit of Gospel. I don’t actually tend to like this style of gospel music, but do like this redo of the old Negro Spiritual Balm in Gilead by the Clark Sisters. Good day and God bless.